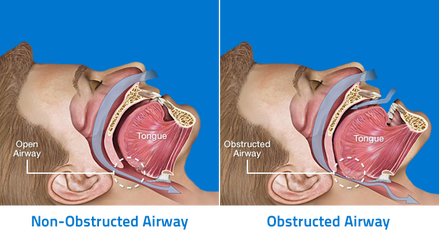 Are you getting enough sleep at night? The average adult is said to need anywhere from seven to nine hours of sleep on a daily basis. If you routinely struggle to get the sleep you need, you could be one of more than 18 million people in the U.S. suffering from Obstructive Sleep Apnea (OSA). Obstructive sleep apnea doesn’t just compromise your mood, energy and productivity levels at work or in class, it compromises your livelihood. Poor sleeping habits can make drivers more susceptible to traffic accidents, fatal and non-fatal alike. Furthermore, insufficient sleep can cause a rise in blood pressure, increase the likelihood of a heart attack 23-fold and lead to other health threats such as diabetes, stroke and obesity. Simply put, OSA is dangerously common in the United States. If you think you’re suffering from it, read on to learn more about the disorder and the treatments being prescribed by the modern medical experts.

So, what exactly is Obstructive Sleep Apnea? Specifically, the word Apnea refers to a cessation of breath. Those who suffer from sleep apnea experience moments during their sleep where breathing is reduced to minimal or non-existent levels. These compromised breathing patterns are a result of a blocked airway that occurs when throat and tongue muscles relax and drop down to block the flow of oxygen into the body. Obstructive sleep apnea occurs when someone experiences a blocked air path and cessation of breath repeatedly during their sleep. These breathing interruptions can be as brief as a few seconds or as long as a minute, and can occur anywhere from five to 30 times per hour. During an OSA episode, your body and its muscles exert more effort just to open the airway so that oxygen can enter the body. Often times, an OSA episode ends and the breathing begins with an abrupt, snore-like exhalation – a reaction that constantly interferes with hearty sleep and causes irregular heart rhythms. A sleep test reveals the number of OSA episodes that occur during each sleep and the frequency with which they occur. This data is then used to categorize patients into one of three levels of OSA: mild, moderate and severe.

The good news is that all three levels of OSA severity can be effectively treated. The severity of one’s OSA dictates which treatment therapy will be prescribed. As the image below shows, there are four common approaches to treating the disorder. For mild to moderate cases, a custom made oral appliance is considered first line treatment and costs are often covered by an insurance provider or Medicare. This carefully designed device adjusts the position of your jaw when sleeping to maintain an open path for air flow. For those that suffer from severe OSA, CPAP therapy is typically prescribed. A CPAP (continuous positive airway pressure) is a ventilator that is placed over one’s face while they sleep. Through its mask, the CPAP applies a constant stream of oxygen to maintain an open air path where a sleeper’s muscles would typically begin to relax, drop and obstruct the airway. The CPAP machine has been the standard for treating OSA for years now, but really, it’s only considered first line treatment for those with severe OSA. While the CPAP is the gold standard in OSA therapy because it flat out works, it is not without its drawbacks. Despite its effectiveness, 68% of those prescribed CPAP treatment quit the therapy within a year of starting. The machine and mask are cumbersome, uncomfortable and often end up in a closet. Some CPAP patients have trouble sleeping because of the sound produced by the CPAP machine. Other problems associated with CPAP include: nasal congestion, headaches, ear pressure, claustrophobia and discomfort. In some cases, a patient may have severe OSA, but they are also incompatible with CPAP therapy. It’s important that these patients still consider the custom oral appliance. While the oral appliance is not first line treatment for severe OSA, it can still help the flow of oxygen while sleeping and serve your ability to achieve sound sleep.

While every patient is unique, there are some shared characteristics among those diagnosed with OSA. It should be said that just because someone snores, this does not mean that they have OSA; however, those who suffer from OSA are certain to snore. OSA is more common among men, overweight people and those over the age of 40. African-Americans, Hispanics and people with larger necks are also more likely to be diagnosed. If someone in your family has OSA, it is more likely that you will be faced with the disorder as well.

At the end of the day, it’s imperative that you discuss your sleep concerns with the right doctor: one that is concerned with you overall health first and foremost. The ideal medical professional to discuss sleep apnea concerns with is an ENT (ear, nose and throat doctor) or a dentist with sleep credentials. Obviously, most of us don’t exactly keep an otolaryngologist on our speed dial. However, most of us have an M.D. and a dentist we see on a regular basis, and we strongly urge you to ask about a sleep screening during your next visit.

At the Mile High Sleep Center in downtown Denver, we have been exploring the subject for years and treating OSA patients for months now. Through careful and customized treatment, we have seen empirically positive results with a majority of our patients. We have the data to show how real OSA patients have enjoyed improved sleeping and breathing patterns as well as more consistent and normalized heart rhythms. Beyond the data, patients at The Mile High Sleep Center have reported unusually high energy levels, improved cognitive function and a newfound appreciation for sound, effective sleep. When a sleep screening places one of our patients at severe risk of suffering from OSA, we refer them to Dr. Keith Schwartz, a Denver MD specializing in ear, nose and throat care. At Dr. Schwartz office, more extensive testing is performed to determine the severity of OSA and most appropriate treatment.

Talk to your doctor, dentist or other medical specialist and ask about a sleep screening the next time you’re in for an appointment. If you think you’re suffering from unhealthy sleeping habits and want to address the issue head-on and right away, call the Mile High Sleep Center, where we’ll take the time to make your life healthier and happier.