The Cost Of No Dentistry 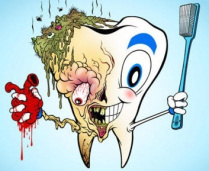 Though costs are not at the absolute top of reasons that patients avoid seeing their dentist (as said earlier, fear tops that list), it is a concern as dentistry is costly.

But not doing dentistry is even more costly. Problems with teeth do not go away by themselves. While the general advice is always to see a doctor for any medical problem, there are some conditions and even minor injuries that the body can sustain and correct by itself. That is not the case in the mouth.

A cavity, a tooth abscess, or severe gum problems will not heal themselves. You cannot ignore a problem and expect it to disappear on its own. On the other hand, there’s an old saying, “Ignore your teeth and they’re going to go away.”

parachutes, life preservers or dentistry. I’ve also had a patient recently tell me, “The stingy man always pays twice.” Getting a procedure done well may cost more on the front end, but getting it done cheaply will cost more in the long run – in having to pay to redo it and in physical costs as you may lose teeth as a result.

Another important aspect to recognize is something already mentioned: our life spans are getting longer. We’re not just living until 60 or 70 anymore. We’re living into our 80s and 90s.

Teeth need to last a whole lot longer than ever before. Attitudes toward keeping teeth are changing too. Hard to believe, but back in 1970, research revealed that the average number of original teeth remaining in a sixty-year-old was six. Six! It wasn’t so obvious because many people had dentures.

Later around 1990, it had improved to between sixteen and twenty retained teeth for most people that age. Still not a great percentage, since we start with 28 teeth, excluding the wisdom teeth. It does, however, show a trend toward people keeping their teeth longer. That would be due to better preventive care and even some treatment.

So yes, while crowning (putting a cap on) a tooth may be costly, not crowning it could cost you the tooth – and everything that results from that.